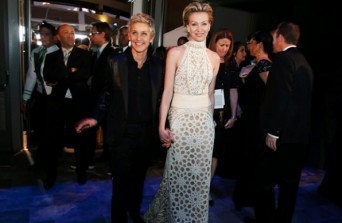 OK! magazine is reporting that lesbian “it” couple Ellen DeGeneres and Portia DeRossi are planning to celebrate their upcoming sixth wedding anniversary by renewing their vows.

The magazine reports that the couple, who married in August 2008, is hoping to quell any Splitsville rumors by recommitting to each other in a lavish ceremony to be held in Sydney, Australia.

According to an unnamed source quoted in the story, DeGeneres and DeRossi “want to show their commitment to each other,” adding, “There have been a lot of headlines suggesting that their relationship is in trouble. They want to quash them.”

In a March issue of People magazine, DeGeneres rebuffed divorce rumors, saying, “I love her so much it kills me. The truth is, and this is corny, I fall more in love with Portia all the time. I really do.”

DeGeneres also addressed the tabloid tales of discord on her talk show, saying, “There’s not one ounce of truth to any of it. I’m very happily married. The only thing we ever argue about is who loves who more; it really is true. If there’s anything you need to know, I will announce it here first.”

OK! Reports that the couple is looking to do something on or around their sixth anniversary, August 16, in Portia’s home country.

“They want it to be in Sydney because the city has a big gay population, and they want to help spur the acceptance of same-sex marriage,” said the unnamed source.