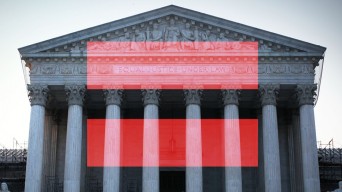 Marriage equality supporters who gathered outside the U.S. Supreme Court on Wednesday erupted into cheers as they learned the justices had found the Defense of Marriage Act unconstitutional.

“I’m thrilled,” D.C. resident Justyn Hintze, who is originally from Florida, told the Washington Blade outside the court. “I think that it’s about time and that sexual freedom and same-sex marriage is a human right.”

D.C. resident Amanda Klinger and her fiancée, Caroline Hunt, held a sign that read “our wedding just got 1138 times more equal” as they anticipated the Supreme Court ruling on cases that challenged the constitutionality of Section 3 of DOMA that defined marriage as between a man and a woman in federal law and California’s Proposition 8. Rev. Rob Apgar-Taylor of Grace United Church of Christ and Varitas United Church in Hagerstown and Frederick, Md., who married his husband in Massachusetts in 2004, told the Blade before the justices issued their DOMA ruling that he hoped they would be “bold” in their ruling.