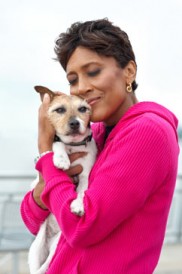 Robin Roberts with her beloved dog

Just like the rest of us, celebrities love animals, especially the furry friends who live to give them kisses (slobbery ones) and jump around like they’re from “House of Pain” when they get home, and who wag their tails wildly when they give them the slightest attention. Yup, they love the pooches and who can blame them? They are a man’s best friend, a companion unrivaled by any other.

But wouldn’t we love it if their furry friends could talk and give us the goods (and the dirt) about their famous human bestie? Well, that would be nice, but it isn’t going to happen unless linguists start learning and teaching woof-woof talk. So I guess delving into the breed of the K-9 friends these celebs are choosing may give some insight into who they are off camera (and Twitter). The following is a list of 10 LGBT celebs, their bow wow, and what their particular bow-wow’s breed may say about them:

Alan Cumming
He plays a campaign strategist and crisis manager named Eli Gold in CBS’s popular TV series “The Good Wife.” He is also starring in the Broadway musical “Cabaret.” He’s one of the most versatile actors in our generation and has had all shades of roles under the rainbow. When he is not working, he’s home with his multi-talented (she does impersonations) pooch Honey who is a Collie-Shepherd mix. Collies, like Lassie, are working dogs: They are strong, have stamina and are highly trainable. It’s also said if you own a shepherd or collie, you are a classic extrovert and can socialize with anyone and everyone. Yes I would say this sounds very Alan Cumming-like.

Jane Lynch
You know her as Principal Sue Sylvester of Fox’s musical-comedy series “Glee,” for which she has won both an Emmy and Golden Globe. Jane totes around her Lhasa Apso Olivia that she adores ever so much.

Lhasa Apsos are happy, joyful and playful, but are also regal and dignified. Lhasa Apsos were bred to be indoor dogs for dignitaries, including the Dalai Lama in Tibet, for hundreds of years. Jane as a monk? Yeah, I can see that.

Anna Paquin
She plays the slightly clueless fairy Sookie Stackhouse on HBO’s hit series “True Blood.” She has been quoted saying that her dogs have grounded her and given her perspective about herself. But for brevity, we’ll only introduce her Catahoula Leopard dog, Banjo. The Catahoula Leopard is the official state dog of Louisiana and is highly affectionate, hard-working and an excellent family dog.

Robin Roberts
The “Good Morning America” anchor, who is a cancer survivor and has recently undergone treatment for a rare blood disorder from the chemotherapy she received, was overjoyed when she was able to reunite with her Jack Russell Terrier, KJ. JRTs don’t grow over 18 pounds, but are very quick and sporty. And very Robin Roberts-like in that they are fierce and resilient.

Anderson Cooper
The anchor of CNN’s “Anderson Cooper 360” jets around the world to do live news broadcasts on location for breaking news, loves his Welsh Springer Spaniel Molly. Molly made an appearance on Cooper’s, now defunct talk show, “Anderson Live,” where everyone was introduced to the shy Molly crouching in Cooper’s lap most of the time. The Welsh Springer Spaniel is a sensitive breed, they have a soft and gentle expression and are extremely devoted to their owners.

Jesse Tyler Fergusson
Better known as Mitchell Pritchett to avid “Modern Family” viewers like me. He treats his dog Leaf as his own child. Leaf is a Maltese-Yorkie mix and is as cute as a button. Maltese dogs are lively, playful, quick learners and brave. Leaf’s other half, Yorkie, is similar. They are small, clever and playful. It’s also been said that if you own a “toy dog,” like a Yorkie, you’re likely to be very creative.

Jim Parsons
Even though his character Sheldon Cooper sings a jingle about cats on CBS’ hit sitcom “The Big Bang Theory,” Parsons is actually a dog person in real-life. His beloved Shih Tzu Rufus is one of two of his prized pooches. Shih Tzu’s are Chinese dogs (the word Shih Tzu in Mandarin translated means lion dog). They were favorites of Chinese Royalty, so much so they refused to sell, trade or give away these dogs until the 1930s.They are happy, lively, alert and packed with character.

Neil Patrick Harris.
This “How I Met Your Mother” star has always had two dogs, a Carin Terrier named Fred and a rescue dog named Watson who is a Labra Doodle-Wheaten mix. He has said that their family has always had these kinds of dogs, if one would pass away, they’d get another. Both dogs are from the Terrier family, but the Labra Doodle requires tons of mental stimulation and needs to be challenged or they get bored, so it takes quite an energetic owner to keep up with them.

Ellen DeGeneres
She has a Poodle-Maltese named Wolf and a Poodle named Mabel. Poodles just like Malteses are “toy dogs” and extremely adorable. In addition to their adorableness, they are also highly intelligent (arguably the most trainable breeds), delightful, very amusing and keen. What a perfect match for Ellen as she is all of those things and a bag of dog biscuits.

Ellen Page
She came out last month at the Las Vegas Human Rights Campaign’s “Time to Thrive” conference in the most ingenious and revealing manner. She has two Poodles of her own, Gigi and Valentino. Just like her name twin (Ellen DeGeneres, duh), she and her dogs are all that and then some.