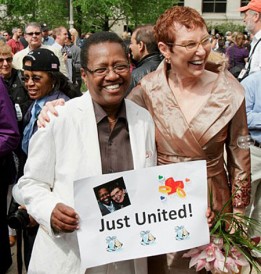 Vernita Gray and Patricia Ewert, the first same-sex couple to be wed in Illinois, at their previous civil union in 2011. (Photo via LGBTQNation)

A federal court in Illinois ruled on Friday gay couples can marry immediately in the Chicago-area Cook County without waiting for the marriage equality law to take effect in June. Meanwhile, LGBT advocates behind the lawsuit are interpreting the decision to mean clerks across the state should begin granting marriage licenses to same-sex couples.

“There is no reason to delay further when no opposition has been presented to this Court and committed gay and lesbian couples have already suffered from the denial of their fundamental right to marry,” U.S. District Judge Sharon Johnson Coleman, an Obama appointee, writes.