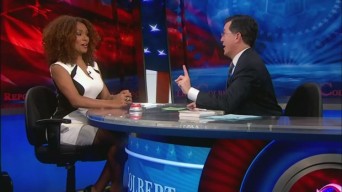 Following transgender activist and novelist Janet Mock’s two appearances on Piers Morgan’s show, she had a chance to speak her mind on the “Colbert Report.”

On the show, which aired on the evening of February 18, Colbert took on a sarcastic tone as he appeared to defend Morgan for being “confused” about why Mock felt the need to dispute his actions after the show was released.