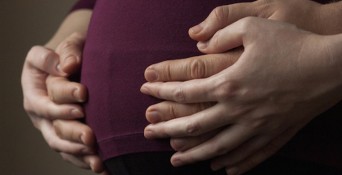 Steph married her wife, Kelly, in Washington, D.C., in 2011. Their union is strong and moving into their newly purchased home is a sign their plans for the future are progressing nicely. At a recent gathering of friends, Steph mentioned her desire to start a family. Someone asked if Kelly would get pregnant. “No, I would,” she replied. Several women looked startled. “Why? Do you think I’m too butch to carry a child?”

Steph’s reply was more snarky than defensive, plus it wasn’t the first time she’d heard a similar remark. Why does her being butch raise eyebrows? After all, there’s nothing unusual about a young woman planning to get pregnant — or is there? Why do we assume a femme would be the first choice to carry a child? And how does one decide what to do when both are women and butch, like this couple, assuming both are healthy and able to carry? These are good questions, and Steph has a few words to share.

She anticipates the response from the hetero community would be to assume a butch woman would not be as interested in bearing children, or that a feminine woman would be more interested; however, wrong those assumptions may be. Some consider Kelly more femme and expect her to take on the feminine role, though Steph sees her as equally butch, if not more so.

“Gender is a social expectation,” she says, which makes the need to counter reactions within the lesbian community that mimic hetero presumptions a little perplexing. She refers to the lesbian community as being inside the same bubble and wonders why this typically empathetic group initially misses the point.

The idea that a femme is going to be the logical choice for insemination is an expectation built around a stereotype. People are not stereotypes. They are individuals and want to be treated as such. At 28, Steph carries a maturity that bodes well for the responsibilities of pregnancy and parenthood. She has confidence in herself, making no apologies for her decisions because they are right for her.

Motherhood was an ideal formed in her mind at age two, before she understood why she liked typical boy stuff or had lesbian yearnings. As people age, they form their personal image and Steph was no different. When she realized lesbianism could be embraced in the way she saw fit, it solidified her sense of self, and subsequently, how she wanted to outwardly present herself to the world, that is, mostly in male-identified clothing.

Now that family planning is on the front burner, Steph says she imagines she’ll continue to wear men’s clothing — only larger sizes, along with black v-neck tees and maybe a novelty item from ThinkGeek.

Comfort and cut are high on the list. Maternity clothes? Forget it! Though she has her preferences, she says clothes don’t define her. She states, “Butches tend to hide their curves and pregnancy is all about curves. I think it’s the opposite (of what people expect to see) that takes people aback.”

Femininity and mothering aren’t about clothes. Decisions about pregnancy, e.g., which woman will carry the child, are between Steph and her wife. Others’ opinions are irrelevant. Like most new moms-to-be, the prospect is both scary and exciting. Steph believes being a nurturing person is part of who she is, just like being a mom someday. When the time comes, she will continue to carve her own image drawing from her inner resources, values, and creativity. For example, as a quilter, don’t be surprised to see her own creation adorning the baby’s crib.

“When you cross that feminine line to butch,” Steph says, “People expect you to be hard. Masculine. It’s not for me to speak about how other butches feel. I’m an all-out butch.”

Knowing who you are and feeling comfortable with yourself are important attributes in personal development and self-esteem, qualities worth passing along to the next generation by example. Steph, you’re going to make a great mom.

One Response to “Butch plus butch plus baby makes three”