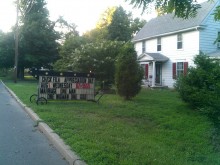 Joianne Fraschilla is a lesbian mom in New Jersey whose son has been eager to visit the petting zoo at the WhiteBriar Bed & Breakfast they pass by regularly. This week, they noticed a sign outside the B&B promoting tomorrow’s “Chick-fil-A Appreciation Day” organized by Mike Huckabee, as well as the message “One man, one woman, one God.” Fraschilla wrote on the B&B’s Facebook wall that she would not be bringing her son there because she was disappointed a local business was anti-equality. She received the following response, presumably from WhiteBriar co-owner Carole Lokan-Moore:

“Isn’t it wonderful Joanne Fraschilla, that you and your son can enjoy the animals here because I have a traditional marriage with a husband who works with me 90 hours a week to take care of these animals, and the summer camp…we’re 66-68 years old…there were no gays or queers in our time…if two old ladies chose to live together…so be it, let them deal with God when they get there…but to have the “face sucking” thrown in my face of two gay lesbians who are totally destroying the “normal balance in a child’s life” as you claim your son…where is the role model that your son needs to know how to act like a man? or will he only see the “one sided selfishness” of a “single parent”…and end up an out cast in society by being “gay” himself because he didn’t have a father as a role model. I’ll pray for you…remember what the bible says: “Lay down with dogs, get up with fleas”…guess that’s why God invented aids…”