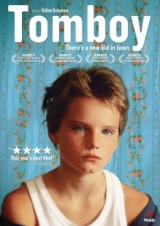 “Water Lilies” filmmaker Céline Sciamma’s second feature, “Tomboy,” tells the story of a family with two daughters, 10-year-old Laure and 6-year-old Jeanne, who move to a new suburban neighborhood over the summer. With her short haircut and tomboy-ish demeanor, Laure is immediately mistaken for a boy by the local kids, and decides to pass herself off as “Mikael.” Mikael catches the attention of leader of the pack Lisa, who becomes smitten with him.

At home with her parents and girlie younger sister, she is Laure. But with her new pals, she embraces her new identity as Mikael. Finding resourceful ways to hide her true self, Laure takes advantage of her new identity, hoping summer never brings an end to her fun.

Céline Sciamma brings a light and charming touch to this contemporary coming-of-age story. It’s a touching story about relationships between children, between children and parents, and the even more complicated one between one’s heart and one’s body.

One Response to “Tomboy”