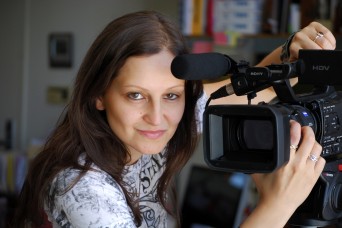 Rolla Selbak is a filmmaker, writer, director, edtior and mentor. Her project, “Kiss Her I’m Famous,” featuring Tracy Ryerson and Ilea Matthews focuses on two BFFs, one fake celebrity sex tape and the quest for success (maybe, in all the wrong places). Rolla caught up with us to talk creative processes, current projects and secret pleasures.

How old were you when you started writing? What got you started?
I officially started screenwriting while I was getting my Computer Science degree in college, though I’ve always had affinity for making films. When I was younger, I used to dress up my little siblings in outfits and make all sorts of ridiculous ‘art’ using my huge, VHS recorder at the time.

Something about movies just completely enthralled me. I would get lost in the stories, and the characters especially. My dream was to be able to create the thing that I loved most. So, here I am.

Funnily enough, when I was in middle school, my teachers would give me very mediocre grades on my writing. Maybe because of the stringent British school rules I had to conform to, or who knows what, but for the longest time, I thought I was a failure at writing.

I made my first short film when I was 12, ironically titled “Never Give Up,” and the rest is herstory.

It stars Tracy Ryerson from the “Real L-Word,” and Ilea Matthews from the Sundance gem, “The Violent Kind.” They’re magnetic together on-screen, I couldn’t be happier with the cast. And now with Season 2 in pre-production, I have some exciting supporting casting announcements coming up!

How did you come up with the storyline and how long did it take? What’s your creative process like?
Nowadays, gratuity and fake publicity seem to be able to catapult just about anyone into the spotlight, so I wrote the series as a satire that tackles the phenomenon in a smart, subtle and entertaining way. My past work has trended towards drama, so I was very excited to delve into the more comedic realm. I also wanted to create a series that a lot of audiences would enjoy in a pop culture type of sense, and there certainly never seems to be a lack of celebrity sex scandals in the news that intrigues us (oh, that Anthony ‘Carlos Danger’ Weiner, I wonder how that’s going to play out? Anyway, I digress).

As far as creative process, I probably spend 90% of my time just sitting at my desk, thinking. Waiting. Anticipating inspiration. Before I embark on any project, I purchase a notebook, a pen and a tea cup that I choose carefully. It’s a ritual I’ve developed over the years. In a week, I’ll probably write 10 pages in one day, and for the rest of the week it’s a cycle of making tea, and sitting at my desk, waiting for inspiration. It’s very sporadic, and almost stressful (especially when I’m on deadline), but somehow, it works.

It took me about 2 months to write Season 1, and about the same for Season 2.

Being able to showcase women filmmakers from around the world, year round, is an exciting proposition, and I feel that the concept of on-line film festivals is still new enough that there’s room for experimentation within that realm. That’s what truly draws me to the challenge.

On the other hand, I would hate to see traditional film festivals vanish, as I think there’s an important cultural role they play within the city holding the festival. Watching films together in a theater, having interesting discussions, meeting new friends, interacting with filmmakers on a personal level. It’s all meaningful.

I think there’s room for both, as there should be.

Do you think the LGBTQ community is represented well in film and television right now?
I think it’s definitely the most exciting time for the LGBTQ representation in media right now, and I feel very fortunate to be a part of it. When my straight, married, male friend texts me, freaking out about how good ‘Orange Is the New Black’ is, you know something is changing for the better!

We have ‘The Fostersm” and shows like “Orphan Black” and “Lost Girl.” We have the film that won the Palm d’Or, which is the Lesbian relationship-driven “Blue Is The Warmest Color.” We have record numbers of films being submitted to LGBT Film Festivals, as well as record audiences.

The whole thing makes me tingle just thinking about it, I really can’t get enough!

What would you tell someone looking to get into filmmaking or creating web series?
I would say study other web series (or films or TV shows) meticulously. Focus specifically on what you like and what you don’t like about it. Write what you would find compelling as an audience member, don’t worry about appeasing anyone other than yourself. You will find an audience if your voice is true, and your criticism of yourself is honest. And never let fear stop you. Just go out and do it. Then do it again. And do it better.

You’re now a part of the San Francisco Women’s Film Institute Leadership Council. What kind of work will this have you doing?
Other than the work in producing the on-line film festival, one of my great passions has always been mentoring young women in filmmaking. I myself never went to film school, and would have loved if such opportunities existed in my day. Through the SFWFI Leadership Council’s initiatives, I have the opportunity to be a part of free and fun workshops in the Bay Area, specifically geared towards nurturing a generation of burgeoning female filmmakers. That is what I am most proud of.

And just for fun — what is your guilty pleasure that would shock your fans to find out about you?
Hmmm. Well, I have a computer keyboard fetish. No, for real. I love the different kinds of designs (both retro and modern), key textures, click response, acoustics when typing… I have a collection of keyboards that keeps growing. I am a total nerd about it.