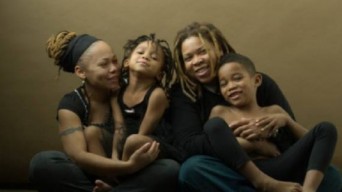 A new study conducted by the University of Melbourne in Australia indicates that children raised in same-sex parent households were happier and healthier as compared to the general population.

Described as the largest study of its type in the world, the report — Parent-reported measures of child health and wellbeing in same-sex parent families: a cross-sectional survey — assessed 315 same-sex parents and 500 children in regard to their physical health and social wellbeing. Researchers found that children raised by same-sex parents scored 6 percent higher than the general population in the areas of general health and family cohesion. Researchers noted that these results “held up when controlling for a number sociodemographic factors such as parent education and household income.”

Lead researcher Dr. Simon Crouch cited parental harmony in same-sex families as contributing to the children’s wellbeing. “It appears that same-sex parent families get along well and this has a positive impact on health. We know that same-sex attracted parents are more likely to share child care and work responsibilities more equitably than heterosexual parent families, based more on skills rather than gender roles. This appears to be contributing to a more harmonious household and having a positive impact on child health.”

Predictably, detractors of the study have discounted the findings. Roslyn Phillips, research officer for Family Voice Australia said, “You’ve got to look beyond studies like these to what happens when the child reaches adulthood, and that’s the only time with independent assessment you can really say what’s gone on with the parenting and then ask them how they’re going in all sorts of ways; I think that would be a more relevant study.”

Ms. Philips went on to question the objectivity of the research, as well. “Simon Crouch is raising two young children himself with his male homosexual partner, The results should be taken with caution.”

Dr. Crouch responded, indicating that his personal situation did not impact on the results of the study. “I acknowledge that I am from a same-sex-parent family, however I am one of a number of researchers on the paper who come from all sorts of different backgrounds. There’s a wide range of research across many different areas; first and foremost I’m a researcher, I’m a medical doctor and I’m a public health practitioner, and the objectivity I bring to this study doesn’t depend on my own personal situation.”

The study corroborates prior research which has demonstrated a general wellbeing amongst children of same-sex parents and Dr. Crouch also suggested the findings may play a role in Australia’s marriage debate.

“Australian politicians and others still object to marriage equality and same-sex adoption based on arguments that children need to be raised by a married biological mother and biological father to do well. This study shows that children can thrive in a range of family contexts and the ways that these families are constructed can bring their own particular benefits to child health and wellbeing,” offered Crouch.