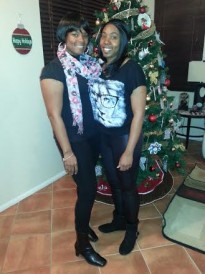 Vicki and Tiffany during the holidays

Meet Vicki and Tiffany, a couple whose fairytale romance was many years in the making before it bloomed into true love!

She is my best friend, my lover, the person with whom I will be in love forever: My wife, Tiffany S. Wilson.

We met 15 years ago while serving a 1 year military tour in the Republic of Korea. She was from New Orleans and I, from New York. At that time we were both in different relationships and still growing into ourselves as adults. Tiffany was introduced to me by a mutual friend and we may have seen each other a total of 5-6 times while stationed in Korea. I returned to the state of Georgia and Tiffany went to Tennessee where she discontinued her military career. I, Vicki A. Grant, continued to blossom in the military while dealing with relationship after relationship and searching for myself.

Tiffany and I continued to keep in touch. It was not an everyday communication type of relationship, but we shared the little things that happened in our lives. My daughter had a birthday, she gave birth to a son. We went through other romantic relationships, promotions in our jobs, a new house for one of us and other important things that occurred.

Hurricane Katrina  brought Tiffany and her family to Las Vegas and in December 2009, a military temporary duty assignment (TDY) brought me to Las Vegas as well for 4 days. Tiffany and I after years of not having seen each other face to face. Once again, we were both dealing with other relationships. She was with her then girlfriend for 2 years and I was just starting a new relationship chapter. After my trip to Vegas we remained in contact. 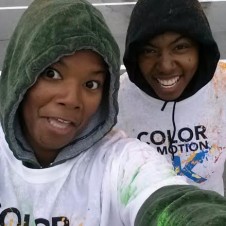 The couple having a whole lot of fun!

It was January 2012 when I received a text out the blue from Ms. Wilson asking “how you doing,” the usual question we would ask. I replied with, “I need to call you later.” At that time I was again on another temporary duty assignment (TDY), this time in Arkansas. We spoke that night for hours. We were both single and working on ourselves. The last breakups were hard to deal with. We began talking on the phone every day, coping with the weekend trips, and building a relationship that was strong and pure, we decided it would be best for one of us to relocate. On June 15 2012, I packed up my home, daughter and our dog and moved to Las Vegas, where we now live and hope to love happily ever after. I know it sounds like a fairytale, but this is the best thing that has ever happened to me and we continue to smile and take things one day at a time.

Looking for your real-life love story? OneGoodLove.com is the leading online dating site created specifically for the relationship-minded LGBT community by the LGBT community. We understand how challenging finding love can be so find LOVE now.