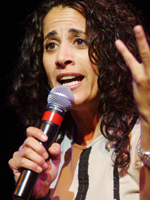 Mimi Gonzalez grew up in inner-city Detroit and now spends 46 weeks a year on the road, performing comedy. When she’s not traveling, home is a walnut farm on five and a half acres in rural Michigan. She got her start in 1987 when she was a finalist for a “Funniest Person on Wall Street” segment on the “Today” show. She didn’t win, but the success propelled her to keep pursuing her dream to work full time as a stand up comedian. “Curve” caught up with Mimi Gonzalez just as she was finishing her seventh season in Provincetown, Mass.

What’s it mean to be a stealth butch?
It means to be a butch with long hair. That’s it. And if you’re a femme, you recognize the way I talk and the way I walk, and who I am is your butch complement, ready to escort you, my darling. I like the girly-girls.

Visit mimigonzalez.com to learn more about Mimi. Catch more Queer Queens of Qomedy this Pride! From Santa Cruz to Northampton, the queens are coming to a town near you.

Read the interview at CurveMagazine.com