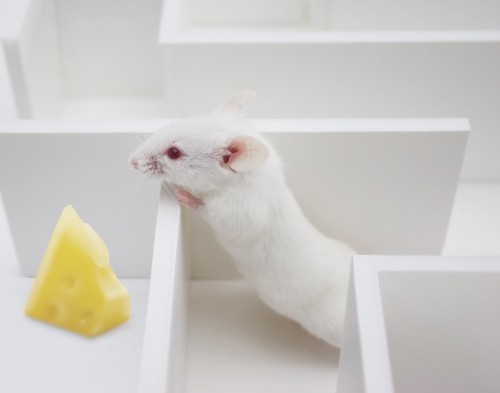 I’m not sure when lesbians began sporting long tails and beady pink eyes, but judging from the number of purported straight women who are looking to experiment with us, it appears that lesbians are the new lab rats.  In perusing various “Women for Women” online personals sites, I am frequently astounded by the number of women expressing curiosity in regard to same-gender sexual relations.

The ads run the gamut from the woman whose “boyfriend just isn’t doing it for me anymore” to the woman who is “happily married with two children, but looking to explore” her sexuality. Holy Nina, Pinta, and Santa Maria!  I’d never quite thought of myself as an uncharted territory, but it appears there are many women willing to set sail on a journey to my little private island.

I often wonder how many card-carrying lesbians offer themselves up for this type of exploration and experimentation. Aside from the obvious moral/ethical considerations (remember, most of these would-be scientists appear to be otherwise involved with a member of the opposite sex), there are the second-tier health and emotional dilemmas. Engaging in sexual relations with a relative stranger who is presumably knockin’ boots with a male with some degree of regularity may give one pause. Not that girl-on-girl sex doesn’t offer its own set of health risks, mind you, but any prospective rhesus monkey would have to think twice before getting it on with a primate who diddles with the banana-bearing chimps on a recurring basis.

One would also have to weigh the perils associated with matters of the heart. What lesbian among us hasn’t used the four-letter “L word” (and I don’t mean “lust”) far too quickly in a relationship, simply because acts of a carnal nature had been performed? For whatever reason, women who love women seem more susceptible to transfer of the love bug during sexual activity, and who wants to offer herself up as research material only to have a broken heart listed among the lab results?

On the possible plus side of the debate, one would have to give weight to the “toaster oven” line of reasoning. Yes, we’re all fantastic lovers. Yes, if these otherwise straight women slept with us just once, they’d be logging on to downloading every Wolfe Video immediately. Yes, once these curious females experienced the unparalleled ecstasy of lesbian sex they would no doubt be trading in their factory-equipped male partners for those who prefer the staying power of a strap on.  Who wouldn’t like to think they possess THAT type of orientation-altering sexual prowess?

If you’re looking for my take (and I know you are) on subjecting oneself to those looking to experience lesbianism on a trial basis, I’d have to ‘fess up to being slightly old-fashioned in my views on such matters.  While I have no qualms about bumpin’ donuts with one who has not yet planted her flag firmly in either the “straight” or “lesbian” territory, I prefer that the encounter not be offered up in the context of a hypotheses which must be either proven or disproven. I’ll leave the experimentation to those more fascinated by chemistry. I was never very good at science. That said, I have to admit that I’ve always had a thing for women in spiked heels and lab coats, but that’s another story entirely.

One Response to “Notes from the lesbian dating rat maze”