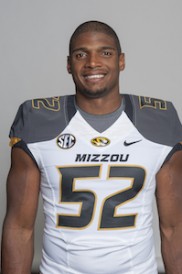 CNN reports that former Missouri Tigers defensive end and 2014 NFL draft entrant Michael Sam revealed today that he is gay. The announcement came during interviews with ESPN and The New York Times.

The All-American is expected to be taken as a high-round draft pick in May and would be the first openly gay player ever drafted into the league.

The timing of Sam’s announcement sets him up for additional scrutiny at the NFL combine, set to begin Feb. 19 in Indianapolis, should he elect to attend.

One NFL general manager told Bleacher Report that Sam, 6’2″ and 255 pounds, will be a true test of whether or not the NFL is actually open to all kinds of players. He believes that if Sam falls past the third round, then “something stinks. Because this guy is easily a high-rounder.”

The NFL released a statement to Bleacher Report saying: “We admire Michael Sam’s honesty and courage. Michael is a football player. Any player with ability and determination can succeed in the NFL. We look forward to welcoming and supporting Michael Sam in 2014.”

A Bleacher Report story says that when asked how he thought his future NFL teammates would feel, Sam said, “It shouldn’t matter.”