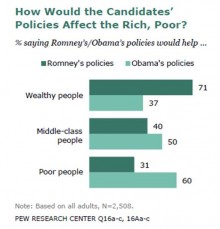 As Republicans gather for their national convention in Tampa to nominate a presidential candidate known, in part, as a wealthy businessman, a new nationwide Pew Research Center survey finds that many Americans believe the rich are different than other people. They are viewed as more intelligent and more hardworking but also greedier and less honest.

Nearly six-in-ten survey respondents (58%) also say the rich pay too little in taxes, while 26% say they pay their fair share, and just 8% say they pay too much. Even among those who describe themselves as upper or upper-middle class1, 52% say upper-income Americans don’t pay enough in taxes.