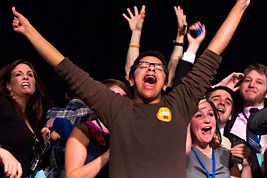 The Minnesota House of Representatives on Thursday approved a bill that would extend marriage to same-sex couples in the state. “I do believe we are on the verge of changing Minnesota’s history,” said state Rep. Karen Clark (D-Minneapolis) who introduced the bill.  Her long-time partner, Jacqueline Zita, was inside the chamber for the vote. “We are strengthening the meaning of marriage by opening it to couples who are committed.”

The Minnesota Senate is scheduled to vote on the same-sex marriage bill today. Governor Mark Dayton has said he will sign it into law if lawmakers approve it.