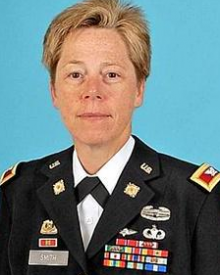 Tammy Smith, previously an army colonel, was promoted to brigadier general on Friday and at the same time publicly acknowledged that she is in a same-sex relationship, making her the first general officer to come out while serving.

What she glosses over is that along with the promotion she is also publicly acknowledging her sexuality for the first time, making her the first general officer to come out as gay while still serving. It comes less than a year after the end of the controversial “don’t ask, don’t tell” law.