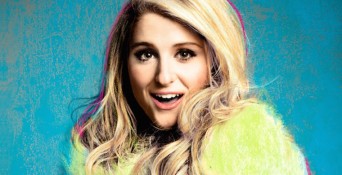 The 20-year-old singer-songwriter from Nantucket will grace the main stage of the Palm Springs Convention Center during the Dinah’s “Black Party” on Saturday, April 4th, 2015 in Palm Springs, CA.

Club Skirts Dinah Shore Weekend, popularly known as “The Dinah”, is the biggest & largest lesbian event of its kind in the world. Founded and produced by Mariah Hanson, The Dinah has, for the past 25 years, continuously been changing minds and changing lives, offering women from all over the world the opportunity to express their true selves and gain an extraordinary amount of self worth. Considered a bucket list event by lesbians of all ages, The Dinah continues to inspire, provoke and entertain.

With The Dinah, Hanson has created a haven where acceptance and tolerance rule. More than a pop song with an infectious beat, “Bass” is a bold self-acceptance message that shares and celebrates the same life philosophy as The Dinah: be free to be who you are.

“Meghan Trainor is the perfect artist to headline the 2015 Dinah, our milestone year. Her song is a record breaking number one billboard hit, and in addition it invokes a new social paradigm that places less emphasis on the exterior and more emphasis on the fact that we are all beautiful and that that beauty comes in many shapes, colors and sizes. I’m especially proud to join with Meghan in sending out this wonderful life-affirming message to our guests. It’s time. And it’s our time!“ says Mariah Hanson, founder and promoter of Club Skirts Dinah Shore Weekend.

Trainor’s insanely catchy single “All About That Bass” was #1 on the Billboard Hot 100 for eight consecutive weeks, rewriting the record for the longest-ruling No. 1 single ever released on Epic Records – dethroning The King of Pop’s “Billie Jean” in 1983 and “Black or White” in 1991, which were on top for seven weeks.

“All About that Bass” has already gone four times platinum and has also become the longest-leading No. 1 by a woman this year.

The unstoppable Trainor is kicking off 2015 with a bang embarking on her first ever North American headline tour, THAT BASS tour. In the meantime, she has already released the second single, “Lips Are Movin,’” from her upcoming debut Album “Title” out January 13, 2015, which is quickly climbing up the charts. Meghan was nominated for “New Artist of the Year” at the American Music Awards and is up for Best New Female Musician at the LOGO NewNowNext Awards.

Hanson’s natural knack for spotting the next best thing in music has transformed The Dinah into the inescapable venue for newcomers to breakthrough. Lady Gaga, Katy Perry, Kesha and just this year Iggy Azalea are a few examples of artists who, post-Dinah, systematically went on to hit international superstar status.

The music industry now looks at The Dinah as a pivotal indicator in the success of emerging artists’ careers, and has put the festival on the A list of all festivals. The Dinah has undeniably made a name for itself as not only an important festival landmark welcoming the biggest names in the music industry; but also the MUST-DO Spring event of the Palm Springs festival season.

Meghan Trainor is the first confirmed headliner joining the 2015 Dinah entertainment line up. Mariah Hanson will be announcing more top-notch performers by the end of the year and early 2015.