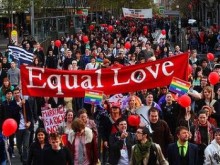 Support for marriage equality is at record levels, according to a new poll, with further pressure set to be heaped on Australian Coalition Leader Tony Abbott with support for the reform amongst Coalition voters also at a new high.

The poll comes as a new ad campaign has been produced by marriage equality advocates to emphasise that “marriage is about family, everyone’s family.”