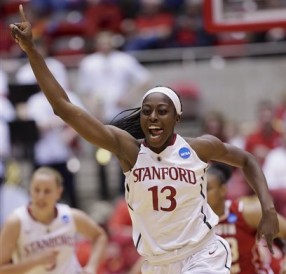 It’s not just the men who are generating a little March Madness nationwide and there’s good reason for that.

There was lots of action in the second round of the NCAA Women’s Basketball Championship, including the nail biter between the No. 4 seeded Maryland Terrapins and No. 5 Texas Longhorns. This one featured 15 lead changes and seven tie scores during the game. In the end, it was Maryland who held on to beat Texas 69-64 in the last minute moving on to the Sweet 16.

The No. 4 North Carolina Tarheels made a screaming comeback from their first-round game in which they barely squeezed by No. 13 Tennessee-Martin. Freshman Diamond DeShields, who set the ACC single-season freshman scoring record, definitely puts the “pop” in popcorn! Keep an eye on this veteran-like player the remainder of the tournament — and the rest of her career. She scored 24 points in the Tarheels’ second-round match-up to help topple No. 5 seed Michigan State, 62-53.

The defending champs and a No. 1 seed, UConn, easily breezed past an outmatched No. 9 St. Joseph’s, 91-52, with their most consistent player Kaleena Mosqueda-Lewis registering a nice “triple double.” Mosqueda-Lewis tallied 20 points, 10 rebounds and 10 assists. Baboom! She’s like Nelly Furtado; everyone wants her on their team.

In a big upset, 12th seeded BYU beat No. 4 seed Nebraska with the help of ten 3-pointers. The BYU women will be making their first Sweet 16 appearance since 2002.

LSU and West Virginia provided another second round barn burner. The game was neck-and-neck until the last two minutes when No. 7 LSU pulled ahead of the No. 2 Lady Mountaineers, securing the 76-67 upset.

Also noteworthy (primarily because I’m a proud Bay Area sports fanatic) No. 2 Stanford unsurprisingly ousted No. 10 Florida State with an impressive defensive performance and a 30-2 run. The final was 63-44. The Cardinals come back to the Bay Area on Sunday to take on No. 3 Penn State.

Joining Maryland, North Carolina, UConn, BYU, LSU, Penn State and Stanford to round out the Sweet 16 will be Notre Dame, Oregon State, Kentucky, Baylor, Texas A&M, DePaul, Oklahoma State, Purdue and Louisville. Sweet 16 play is set for March 29 and 30 and is sure to provide much more Action Jackson!