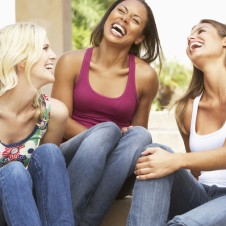 Lesbians are often thought to be humorless, yet we can often be the butt of jokes. This week “The New Normal” came under fire for saying lesbians were frowny with “gingerbread man bodies.” Surely we’ve heard worse. I know I have. Take Eddie Griffin’s homophobic stage act for example. Or when Monica Crowley or Gordon Ramsay think it’s hilarious to refer to straight women as lesbians like it’s the worst insult possible.