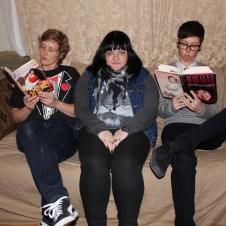 
Many moons ago I was invited to an evening of queer comedy in the back of a pizza parlor. I was of course ecstatic at the promise of a line-up of funny ladies as that is the stuff that dreams, or lesbian erotica, are made of. So off I went, to witness history being made in a nearly packed room for an inaugural comedy night. Already, one of a kind. The evening definitely had some hits and misses, but the hits were knee-slapping hilarious and came from Kirsten Kuppenbender, Jes Rega and Diane Gasperin. These women have since come together to create “Lez Stand Up,” a Portland based queer comedy night that has become wildly successful since it’s inception back in 2010.