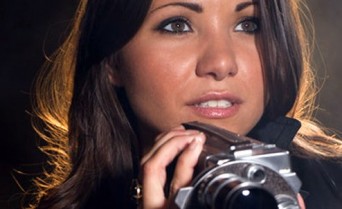 If you’re looking for Gabrielle Lindau, chances are you’ll find her behind a camera lens. Perhaps best known for the 2010 comedy short film “These Showers Can Talk,” writer, producer and director Lindau is passionate about translating stories through film and photography.

Recently, Lindau has drawn upon her filmmaking expertise to lend her talents as Lesbian.com’s resident film reviewer. In between showings, we caught up to her, stole her popcorn and made her respond to five random questions for this week’s Fast 5.

1. If they started offering free trips to the moon tomorrow, would you sign up to go?

I’d prefer a free trip to my kitchen where I keep the moon pies.

2. Do you have any phobias?

3. Window or aisle seat on the airplane?

4. What’s the maximum number of cats you’d feel comfortable owning before worrying that the neighbors were starting to whisper, “There goes the cat lady.”

Do possums count as cats?

5. If you could be anywhere else in the world right now, where would you want to be and what would you be doing?

As long as it involves my fiance Emily (and no trolls or aliens are involved) I’d like to be anywhere in the world having fun.