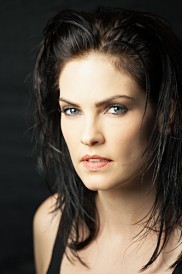 Photo by: The Boyz Photos

A native of rural Indiana, Jill Bennett began her acting career at 16. A short two years later, she’d won a state speech title and matriculated to Bradley University on a theater scholarship.

From there, Bennett first gained notoriety for her role in the action feature “In Her Line of Fire” in which she starred alongside Mariel Hemingway. Since that debut, she has starred in 10 films, including indie hits “X’s and O’s” and “The Pleasure Drivers;” she became a series regular on five separate occasions, perhaps most notably with Here TV’s “Dante’s Cove;” and she guest-starred on several more series, including Logo’s “Rick & Steve.” Jill has recently gone on to co-executive produce and star in two award-winning series of her own: “We Have to Stop Now” and “Second Shot.”

Bennett will soon be traveling to Costa Rica with her new media collective group, The GZBZ (The Girlz and Boyz). The Costa Rica trip is part of an International LGBT Volunteer Vacations and People-to-People Program, an effort which aims to send LGBT citizen ambassadors to countries on five continents, including Costa Rica, Italy, Greece, Peru and more, offering LGBT tourists an opportunity to promote tolerance and understanding around the world as they enjoy an unconventional vacation.

The second season of Bennett’s “Breaking Fat” web series is set to air this summer and you can expect more new projects from The GZBZ later in 2014.

I was able to get Bennett to play along with our Fast 5 before she packed her bags for Costa Rica.

1. Do you have a hidden talent? Do tell!

Lady Gaga. Madonna blew it for me about 8 years ago when I paid $400 to see her in concert and she refused to give us one encore.

3. If they started offering free trips to the moon tomorrow, would you sign up to go?

Yes! I wanted to be an astronaut when I was a kid!

4. Tell us one thing about you that most people probably don’t know, but you’re willing to share.

I had to go to the school nurse to have a green skittle dislodged from my nose. (One of the dangers of being the class clown.)

5. If you had to give up one of the following for an entire year, which would you choose to live without: cell phone, television, hair products or chocolate?

Hair products. I don’t use many now, and chocolate is non-negotiable.