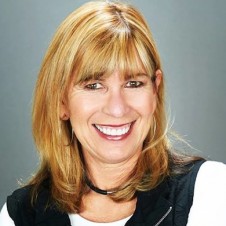 No, Women On A Roll isn’t a sandwich shop for single lesbians. It’s one of lesbian social butterfly Andrea Meyerson’s two businesses serving the LGBT community.

Based in Los Angeles, Meyerson started a cycling group, Women On A Roll, when she came out so she could meet women who shared common interests. Well, it worked. Meyerson has grown Women On A Roll into a huge social club that travels the world together.

As her social circle grew, she began producing bigger and bigger events for her group, which grew into Standout Productions. Over the past decade, Meyerson has been filming these productions, creating the popular “Laughing Matters” series and more.

Currently, Meyerson is working on a documentary about Provincetown called “Clambake.” She took time out of her busy schedule to share the secrets of her success.

What do you do and why?
I currently own and operate two businesses:

Women On A Roll, a social and travel organization for lesbians, bi women and their friends.

StandOut Productions (soon to be Andrea Meyerson Productions): In this company, I produce films, television specials and live productions; such as, comedy shows and concerts.

Why? I believe the work I’m doing now is my calling. I’ve just completed my eighth documentary and I feel it’s so important to document and preserve our culture and history.

What did you do before you started your company?

I was in corporate world for quite some time, mostly as a national account sales manager.

How did you come up with the idea for your company?

By accident, really. I came out and at the time there wasn’t much available for lesbians. I was a little discouraged. Since I had a passion for bicycling, I decided to start a lesbian cycling club. The community was very receptive and we started offering many social events. It started out as a hobby, but I soon felt a strong desire to serve the community and decided to leave my corporate gig and start a company producing fundraisers for LGBT nonprofit organizations. That led to producing live comedy shows and concerts and special events. And that ultimately led to filmmaking!

What do you find most rewarding about owning your own business?

My very favorite thing is to create something where there was once nothing! When an idea comes to me, whether it’s a subject for a new film or a new event or travel destination for Women On A Roll, I have to the freedom to implement it and create something that may have never come into existence otherwise. And it’s even better knowing it makes a difference in our community!

What would you say is the single most important key to sustaining a business long term?

For me it’s been helpful to have more than one business. I feel more secure knowing I have options when something is bringing in enough money. Next year is the 20th anniversary for Women On A Roll and I would have never been able to sustain it without running my production company as well.