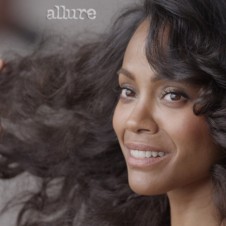 “Star Trek Into Darkness” star Zoe Saldana spurred a lot of bizarre articles this week after a tidbit from her “Allure” cover story quoted her saying that she was “androgynous” enough to raise a child with another woman. Clearly androgynous does not always mean something sexual, so it seemed strange to refer to her as bisexual without her having said so. “Allure” released more from the interview. One thing’s for sure: Zoe knows how to stir up some headlines.