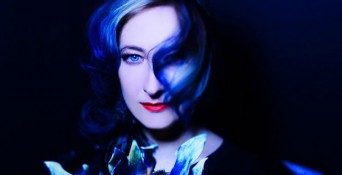 New York, NY — Yahoo! Music is hosting the exclusive premiere of the new video, “Wax” by prolific songstress Rachael Sage. The video for the song “Wax”, from her new album Blue Roses, may just be her most evocative yet. Directed by award-winning filmmaker Nick Clark and set in the eclectic, non-profit Los Angeles-based MorYork Gallery, the clip shows the colorful Sage – who is also a visual artist herself – seamlessly integrated within the extraordinary industrial jungle of veteran sculptor Clare Graham.

Made entirely of recycled materials such as soda cans and puzzle pieces, Graham’s unusual artwork provides the perfect context for Sage’s alt-pop song about the karma we create within relationships. Renowned theremin master Armen Ra (Antony & The Johnsons, Marc Almond) also makes a guest appearance in the video.

Rachael Sage’s 11th studio album “Blue Roses,” which premiered via All Music Guide, is available in stores and online now. Called “a treasure chest in a candlelit chamber, glimmering with myriad delights,” by Curve Magazine, “Blue Roses” is a collection of songs about the impact any single person can have upon the destiny of another. Billboard.com sums up Rachael’s work as: “the stitch between the great rock and pop traditions of the past…”.

The theme of transformation recurs throughout the the album Blue Roses, which was why Sage embraced the opportunity to bring the song “Wax” to life in such a unique space. The singer admits that when she first entered MorYork Gallery she “felt like the inside of my brain had exploded into an enormous loft. I was so at home in Clare Graham’s imaginative universe. The way he had transformed everyday items into transcendent, shockingly beautiful sculptures felt like it captured the essence of what is possible when art intersects with idealism.”

Another highlight of the album is Neil Young’s “Helpless” — re-imagined as a duet featuring folk icon Judy Collins, with whom Sage is currently on tour. Propelled by her signature piano accompaniment, Sage imbues the classic anthem with a warmth that is entirely her own. This rendition of “Helpless” also appears on Judy Collins’ “Both Sides Now: The Very Best Of Judy Collins,” which also hit stores on November 4.