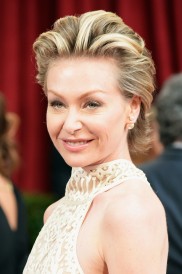 We all know Portia De Rossi from her time on “Ally McBeal” and “Arrested Development” and, of course, as one half of the Hollywood “lesbian It couple” along with wife of six years Ellen DeGeneres. But we managed to turn up these 10 tidbits you might not already know.

1. De Rossi will reportedly be joining the cast of “Scandal” for the upcoming Season 4, portraying an as-yet-unidentified but “formidable” character.

2. De Rossi was born Amanda Lee Rogers in Victoria, Australia, but adopted the name Portia De Rossi at age 15 in an attempt to reinvent herself. “Portia” was drawn from the Shakespeare play “The Merchant of Venice” and paired with an Italian-sounding last name as the actress had a love of all things Italian.

4. Portia was raised by her medical receptionist mother after her father passed away when she was just nine years old.

7. De Rossi Portia struggled with with Anorexia Nervosa and credits DeGeneres for helping her to overcome the disorder.

8. Portia studied law for 18 months at the University of Melbourne before starting her acting career.

One Response to “Women we love: 10 facts you may not know about Portia De Rossi”