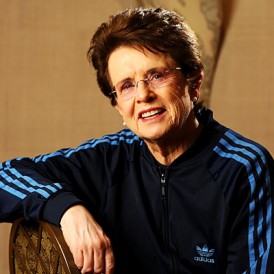 Billie Jean King is a legend in the tennis world — a former No. 1 ranked player with 39 Grand Slam titles, she was inducted into the International Tennis Hall of Fame in 1987.

King is also renowned for her efforts toward achieving gender equality, famously defeating Bobby Riggs in 1973’s “Battle of the Sexes” and threatening to boycott the U.S. Open unless the tournament offered equal prize money to both men and women.

More recently, President Obama honored King as a member of the U.S. delegation at the 2014 Sochi Olympics and the celebrated athlete and activist continues to lend her talents to efforts aimed at furthering the rights of women and LGBT citizens.

You may think you know a lot about this lesbian icon, but here are 10 tidbits we think may surprise you.

2. Her younger brother, Randy Moffitt, was a pitcher for the San Francisco Giants, Houston Astros and Toronto Blue Jays.

5. King’s life partner, Ilana Kloss, was inducted into the Jewish Sports Hall of Fame in 2006.

7. King’s father was an engineer for the fire department and her mother was an Avon representative.

8. King is the founder and first president of the Women’s Tennis Association.

9. She received the Presidential Medal of Freedom in 2009.