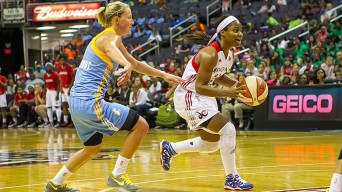 “I am pleased to announce that we have concluded the collective bargaining process and have reached an agreement with the WNBPA that provides the league with a long-term foundation for growth while also guaranteeing increases in player salaries and benefits,” said WNBA President Laurel J. Richie. “This agreement caps a successful 2013 season both on and off the court, and we are now focused on delivering the best basketball in the world.”

The agreement provides for roster expansion from 11 to 12 players, incentives for players to limit off-season overseas play, an undisclosed increase in salary caps, an expedited path to player free agency and revenue sharing provisions that now make it more likely that players will share benefit from league revenue growth. The new CBA takes effect with the 2014 season and will remain in effect for eight years, with either the WNBA or WNBPA reserving the right to opt out after the sixth year.

Key to ownership was establishing a mechanism for limiting players’ off-season play in leagues overseas.

“The notion of really trying to find a way to both recognize the overseas play but offer an incentive to players to limit their overseas play was very important to our ownership group,” Richie said when asked about the league’s priority during negotiations. “So for us that was a very important point and we’re glad that we were able to reach an agreement in that area.”

While a star player can make up to eight times her WNBA salary in overseas league play, WNBA ownership sought to provide incentives for players to limit such play to no more than three months per year. Under terms of the new CBA, each team will be allotted $50,000 to disperse as it sees fit to persuade players to forgo long-term overseas play. In doing so, the WNBA hopes to minimize the number of games missed by star players due to injuries incurred during the WNBA off-season.

“That is $50,000 per team, per year,” Richie said when asked about the time off bonus. “That can be one player, that can be more than one player. The only restriction or guideline is that the player agrees to limit their overseas play from 0 to 90 days. So we think that’s a great way to, from our standpoint, acknowledge that there’s a market for players going overseas and we wanted to offer an incentive for players to stay stateside or limit their overseas play during our off-season.”

Popularity of the WNBA was at an all-time high in 2013 with double-digit growth in television viewership, a spike in web traffic at WNBA.com and increased game attendance. ESPN currently holds the television rights for WNBA games via an agreement which extends through 2022.