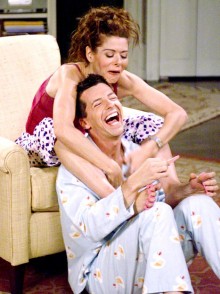 Sean Hayes and Debra Messing
on “Will and Grace”

There will be a “Will & Grace” reunion on “Smash” next season when Sean Hayes joins the cast of Season 2. According to NBC, Hayes will appear in multiple episodes as Terrence Falls, a comedic TV and film star who is making his Broadway debut in the musical “Liaisons.” The new musical is based on the novel “Les Liaisons Dangereuses.”

Look for Hayes’ character to bring comic relief — and some trouble — as he becomes a “major thorn” in Ivy’s (Megan Hilty) side.