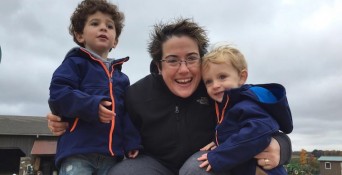 I am a minority. I am a lesbian in a straight world. In my career, I am a woman who works in a man’s world. In these ways, I am just one of us. However, I am a minority in our community because I am the mama to two boys who have no genetic connection to me AND yet, I have no intention of adopting them.

Many non-gestational parents (NGPs) in same-sex relationships would envy my option to complete a second parent adoption (SPA). I live in a state where it is legal. I also live in a state where, as long as we never leave the state, the boys are as legally mine as they are my wife’s. Slowly, this is becoming the normal.

There are so many “what ifs” in this land of non-gestational parenthood. What if my wife left me? What if my wife were to pick up and run 60 miles across the border where the boys aren’t mine? What if we are on vacation and she and the kids are in a horrific accident? The list goes on. No matter how I explain myself, someone will find another “what if.”

Parents will debate both sides of many issues. Will you co sleep or not? Will you breast feed? If you breast feed, how long will you do it for? Will you vaccinate? In these debates, there is your right, but there isn’t a right. No matter what you decide, you do it because you love your children. When I listen to NGPs argue for SPA, I hear silence on my side of the argument. I hear people list the “what ifs” as “if” because I don’t worry about them, I don’t love my boys enough. I hope in that sharing our story, I break a silence for so many that also navigate NGP parenthood sans an SPA.

I should make something clear. This IS NOT my side of the debate. Truthfully, the argument to do an SPA is pretty darn good. The choices I have made probably cannot stand up to the “what ifs.” It is strictly my side of the story. It’s a side I have a feeling many NGPs share.

I met my wife almost 10 years ago. We both were raw after being cheated on. On our first date, we set the boundaries of what any future relationship would look like for us. We wanted a partner who would go through anything with us and who we would want to go through anything with. There was one exception. Cheating. I fell for it twice in past relationships. She was lucky enough to only make the mistake once. We both knew what it felt like for it to be coming. The distance you felt even in the same room. The sudden lack of ANYTHING in common. We agreed that if we were with the right person, and that feeling started to creep in, we would stop it.

The failure of past relationships taught me that relationships are hard. We were really fortunate to find each other. Of course, it was easy in the beginning. Bliss. If only all relationships could stall forever in the honeymoon period. Naturally, life goes on and the reality of how difficult it is to stick by someone, no matter what, hits.

We are a spontaneous couple. We have made many big decisions in split seconds. I’m pretty sure we’ve never walked into a car dealership without getting a car. For this reason, we don’t walk into that many dealerships. There was the time we bought windows from a guy who approached me in the clothing section of a department store because they looked nice. Of course, I mean the windows, not the guy. Our second house, it fit our criteria so we bid over the asking price and allowed the seller’s realtor to talk us out of our own inspection. Now, when we find another thing wrong, we remind each other, this is a house our boys love.

We had talked about children for a long time. The talk got more serious as we finished our post graduate degrees, merged bank accounts, bought our first house and, of course, got a few dogs and a cat like all good lesbians in suburbia. I told her I wouldn’t have children unless we were married. Being a lesbian is good birth control. It prevents spontaneity in even the most manic couples.

So the wedding planning began and went on and on and on. If you are married, you might agree that the act of planning a wedding is loaded with ups and downs. The shear nerve it takes to arrive at the altar alone shows you love someone. Then you say those words. In front of almost 200 witnesses, we said the words we agreed on years before and were living every day. Through sickness and health, good and bad, until death do us part.

That lesbian birth control. You don’t come home from your honeymoon with a baby in the womb. We had to decide on who would carry. What would we carry? The other’s egg? The sperm of a known donor or an anonymous donor? Once we decided she would carry and we’d use an anonymous donor, it felt like we still hadn’t made any choices. Which bank? What color hair? We were picking things in a donor you don’t even pick in your spouse.

So we made our decisions and moved forward. I was there every time she was inseminated. I was there when we got our “BIG FAT POSITIVE!” I probably worried more than she did about “the pregnancy” in the beginning. I was at every appointment. I tore out all the carpets in the house because she couldn’t stand the odor of old dog pee (that we cleaned and cleaned and cleaned). I painted the nursery and assembled the furniture. I was there to hold our first son skin to skin moments after he was born. He didn’t grow in me, but no one who knows us ever questioned if he grew in my heart. He was genetically like my wife but that made him no less mine. At some point, we decided together, against SPA.

No. 2 made his entrance exactly 20 months later. We bought the bigger car, the bigger house. We were prepared. It all went off without a hitch. That was, until he decided to be born during a flu epidemic. My wife developed chorioamnionitis. The medical team decided it could be the flu. This meant that once our second son came out, he was taken away from her immediately. She would not be able to be within 15 feet of her for the next day. I was the one that pulled the rocking chair as far away from her as I could, took him against my skin and cried as I told him how amazing his mommy was and how proud we should be of her.

I followed him to the NICU and watched as his sugar plummeted from the hot womb he was pushed out of. I thought he was going to die. I didn’t have her there with me. I believe it is for the best now. She didn’t need to see him like that. For a second time, I was on the birth certificate as parent No. 2. For a second time, we decided together, against SPA.

If someone asked me if they should go through with an SPA, I’d tell them to research it for themselves and go with their gut. Those “what ifs” I mentioned above. They happen. NGPs lose their children in nasty break ups. Birth mother’s find themselves with no right to seek financial support from the person they thought was as much the parent of their child as they were. SPAs are not wrong. They are wonderful for those who want them.

In our world, we have so many friends who have gone about making a family different than us. We so carefully and perhaps selfishly picked out our boys. Our friends have selflessly been given children from the foster system. In our state, it’s a system we’ve seen hold kids in limbo for years, not adoptable but not able to live with their birth parent. We celebrate when these friends finally get a green light and get to adopt. It’s something I’d like to let them have as their own moment.

Although we are spontaneous, we have made many very conscious decisions to protect our boys more than an SPA can. We have decided to go to counseling and invest in each other so that they may be surrounded by love. The counselor looked at us cross eyed the first session and still does. She can’t figure out why we go there. I think it’s cheaper than date night. We have decided to live in a state and specifically a school district that is welcoming to same-sex couples and their children so they don’t feel too different. We make every effort to make sure family and friends understand the pronouns we use. We don’t hide. We expose them to every normal. We celebrate our version of normal every day.

I am a minority within a minority because I won’t let a piece of paper define me. I am without a doubt, mama. I have an incredible wife. She carried two amazing little men into this world for us. We decided years before children that the other was the one worth fighting for. Marriage and children are not easy. For us, they give back in what seems like much bigger ways than what we sacrifice for them.

So that is us. That is what our NGP non SPA life looks like from behind my eyes.

With 10 years, the birth of two boys, some pricey windows, a few nice cars and many dogs and cats behind us, we have barely started going through the everything in life together. We can’t keep them little forever.

Michelle Circe lives in Rochester, New York, with her wife and two sons. When she isn’t busy as an emergency medicine physician, she enjoys traveling and spending time with her family.

One Response to “Why I decided not to adopt my sons”