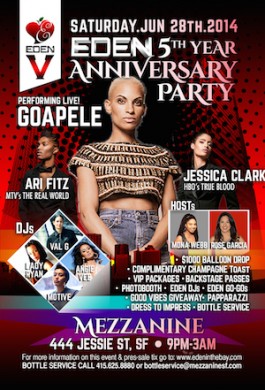 San Francisco Pride can be overwhelming. It’s the largest Pride in the states, boasting about 500,000 attendees each year. There’s a lot going on in San Francisco during Pride weekend, so we’ll make it easy for you: Eden.

Eden is like a queer female pride within SF Pride, and Thursday, June 26, through Sunday, June 29, marks Eden’s 5th anniversary. You’ll be among 5,000 other queer women during the weekend-long event.

Thursday, June 26, at 9pm kicks off Eden weekend at the Supper Club. Lauren Bedford Russell from Showtime’s “The Real L Word” and MTV’s Brittney Duet from “Nick Cannon Presents: Wild N’ Out” will be hosting the fashion show turned DJ dance party. This event will be filmed for an up and coming reality show, and San Francisco native rapper and singer-songwriter Oh Blimey will be performing.

Friday marks the Eden All White Everything party at 9pm at The Factory with three dance rooms, a variety of DJs, go-go dancers, a photo booth and performances by pop-rapper and singer Colette Carr and emcee, poet and songwriter Aima the Dreamer. Jessica Clark of HBO’s “True Blood” and Nicole Conn’s “A Perfect Ending,” along with Ari Fitz of MTV’s “The Real World Ex-Plosion” will be hosting the evening, along with Rose Garcia from “The Real L Word” and Eden’s very own Mona Webb, the executive director of the EDEN LGBTQ Youth Foundation.

On Saturday, Eden is hosting their first ever, and only, Eden 5th Year Anniversary Party at 9pm at the Mezzanine. Clark, Fitz, Garcia and Webb will be hosting again, on top of the great music, go-gos and photo booth, there will also be body painting, a free champagne toast, a $1,000 balloon drop at midnight and Oakland native, neo-soul singer-songwriter Goapele, called the “spiritual love child of Sade and D’Angelo,” by Rolling Stone magazine, will be performing for your pleasure.

Sunday is the final party sendoff at the Parliament. The Eden After Pride Party is the only Oakland-based event (Oakland has the largest number of lesbians per capita in the United States) and will kick off at 7pm. This will be the time for you to woo the women you’ve been eyeing all weekend or to solidify your connections before you head back out into the real world.

You can purchase tickets to individual events, or you can buy passes. The All Access VIP Pass gets you in to all of the events, plus access to the Eden VIP Lounge, exclusive access to the celesbians and recording artists, complimentary hors d’oeuvres, private bar, private waitresses, VIP hosts, exclusive entrance so you don’t have to wait in line and photo ops with the celesbians, musical artists and models. Details.