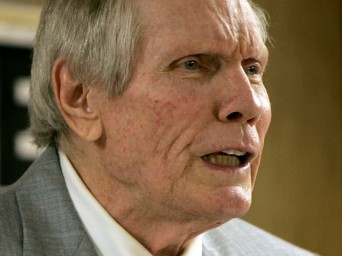 Westboro Baptist Church (WBC) founder Fred Phelps, Sr., is on his deathbed according to stories from the Associated Press.

While details on Phelps’ condition are sparse, WBC spokesman Steve Drain said, “I can tell you that Fred Phelps is having some health problems. He’s an old man, and old people get health problems.”

Phelps and the WBC are infamous for picketing military funerals and espousing venomous anti-gay attitudes. The group claims that the deaths of military soldiers are God’s punishment for America’s immorality and tolerance of homosexuality and abortion and often appear at military funerals with signs reading “”Thank God for 9/11” or “Thank God for dead soldiers.”

WBC, a relatively small group comprised primarily of Phelps’ extended family members, and their controversial tactics served as the catalyst for the enacting of laws in several states which limit picketing at funerals. However, in a notable free-speech ruling in 2011, the U.S. Supreme Court ruled that neither the WBC nor its members could be sued for monetary damages for inflicting pain on grieving families.

Amidst reports of Phelps’ failing health, news that the pastor was excommunicated from the church he founded have also surfaced.

“The excommunication occurred after the formation of a board of male elders in the church. The board had defeated Shirley Phelps-Roger, the church’s longtime spokeswoman, in a power struggle, and Fred Phelps Sr. called for kinder treatment of fellow church members.

The board then ejected Fred Phelps Sr., who founded the church in the 1950s.”

On March 15, Nathan Phelps, one of Fred Phelps’ 13 children, wrote about his father’s ex-communication from the WBC on Facebook:

“I’ve learned that my father, Fred Phelps, Sr., pastor of the “God Hates Fags” Westboro Baptist Church, was ex-communicated from the “church” back in August of 2013.” He is now on the edge of death at Midland Hospice house in Topeka, Kansas.

I’m not sure how I feel about this. Terribly ironic that his devotion to his god ends this way. Destroyed by the monster he made.

I feel sad for the hurt he’s caused so many. I feel sad for those who will lose the grandfather and father they loved. And I’m bitterly angry that my family is blocking the family members who left him from seeing him, and saying their good-byes.”

Nathan, who was ex-communicated from the WBC almost 37 years ago, is one of four of Phelps’ children who have left the church. The other nine remain active members.

It is unclear as to whether or not Phelps will be remembered during a memorial or funeral service after his passing. A WBC member previously indicated that the group does not believe in having funerals or memorials, telling The Huffington Post, “We don’t worship the dead in this church, so there’d be no public memorial or funeral to picket if any member died.”