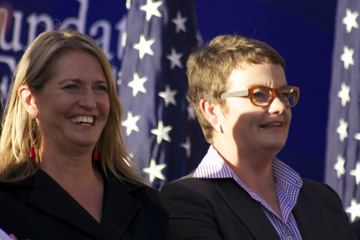 The rally was kicked off by Dustin Lance Black, the Oscar winning screenwriter who wrote the screenplay “Milk.” Black is also a founding member of the American Foundation for Equal Rights (known as AFER). AFER is the organization that sponsored the Federal lawsuit which resulted in striking down Prop 8. At the rally, Black reminded the crowd that at the 2009 Oscars he promised the young people that very soon there will be equal rights federally. Black reminded ralliers that Harvey Milk exhorted the LGBT community to refuse to accept crumbs.

Also speaking at the rally was West Holllywood Mayor Pro Tempore John D’Amico. D’Amico said, “We are no longer the other! We are Americans!”

Kris Perry told the crowd that she grew up in Bakersfield California, a conservative town which overwhelmingly voted in favor of Prop 8. She said, “I grew up a tomboy, knowing I was a little different.” She added, “I still love the state…where I will marry the woman I love. California you are better today than you were yesterday. California you are the golden state. Not the silver state. Not the bronze state. But the golden state.”

Also speaking at the rally were renowned lawyers Ted Olson and David Bois, the political polar opposites who orchestrated the successful lawsuit. Olson told the crowd that the best legal strategy was to let the court hear the plaintiffs describe how Prop 8 negatively impacted their lives. 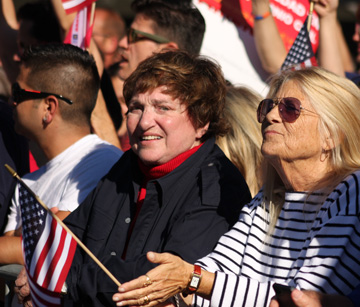 Robin Tyler, left, and Diane Olson were plaintiffs in the state lawsuit that initially granted same-sex marriage rights in California. Prop 8 was designed to overturn the results of their lawsuit. They were the first same sex couple in Los Angeles County to get married. (Photo: Gail Ehrlich)

Chad Griffin, the current President of the Human Rights Campaign and a founding AFER Board Member urged the crowd to continue the hard work of seeking equality. Griffin set a new goal stating, “within five years, we will bring marriage equality to all 50 states.”

Gail Ehrlich is a career prosecutor and is presently writing a book discussing the legal history of LGBT Americans.