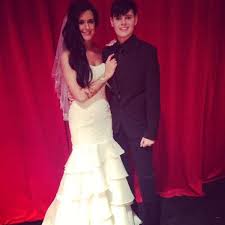 The couple at the Grammys.

Seattle, Washington couple Brittany and Sally Pennington were captured on camera during their wedding last Sunday when the Grammys put on a mass ceremony during a performance of Macklemore and Ryan Lewis‘s “Same Love.” The track was up for Song of the Year, and had out lesbian vocalist Mary Lambert joined on stage by Queen Latifah and Madonna as is par for the course with the Grammys.  Brittany said she saw a casting call for the event on Craigslist, which said it was “looking for couples who wanted to get married at a huge event.”