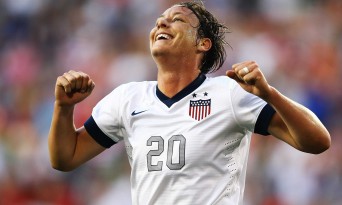 Abby Wambach took 12 years to score 156 goals for the USWNT, but only 29 minutes to tally another four Saturday night to propel her past the legendary Mia Hamm and claim the title of all-time leading scorer in international soccer competition.

In a game against South Korea at Red Bull Arena in Harrison, New Jersey in front of a crowd of almost 19,000, Wambach wasted no time in tying Hamm’s prior record of 158 then rapidly surpassed it, scoring four times in the first half for a total of 160 goals in her illustrious international career.

Teammates Lauren Cheney, Megan Rapinoe and Alex Morgan netted assists and Cheney added a goal of her own as the U.S. went on to blank South Korea 5-0. The record-breaking 159th goal came on a diving header off a perfect corner kick from Rapinoe. Wambach celebrated with her teammates who streamed off the bench as the appreciative crowd erupted.

“It’s surreal to begin with,” said Wambach. “I’m so thankful my teammates were trying to get me those goals. I can’t thank them enough.”

The stand-out forward added, “As a competitor you want to be done with the things that put me at the forefront of conversations. This team is too good to be talking about one person.”

The 33-year-old left the game in the 58th minute to chants of “Abby, Abby,” after making history in the final USWNT match of the season. The USWNT wrapped up the season with an 8-0-2 record and won’t play together again until a match in early September.