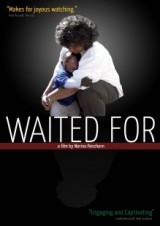 “Waited For” is a feature-length documentary that interweaves three stories of South African lesbians who adopt across racial lines. Pip and Lee are both white and have two adopted black daughters. They appreciate the abundant, upper-middle class lifestyle that being white in South Africa affords. Then we meet Paula, age 45, a recovering addict who runs a construction company. She is white and tries to raise her 2-year old black son, Matteo in a multiracial environment. We also follow interracial couple Kelly and Leigh-Ann from the beginning of their endeavor to adopt up to the day they bring their baby home a year later. Though the adooption agency and their assigned white social worker mean well, they encounter homophobia and apartheid-era ideas on race during the adoption process.

Such families are a new phenomenon in this young democracy that until 1994 was ruled by Apartheid policies. Through their stories we see the progress that has been made in South Africa, but also the difficulties that families face when they challenge the traditional hierarchies of race and heterosexism that are still deeply entrenched in the South African psyche. The unique power of the film lies in its dynamic intermixing of the domestic amidst the political. In addition to the heart-wrenching moments inherent to stories of familial love overcoming the hurts of racism and homophobia, each of the three families’ stories reflects a different approach to the larger agenda of creating a post-Apartheid South Africa that is integrated and equitable. Sometimes they succeed in their efforts and other times they hit up against setbacks, but their determination never flags.