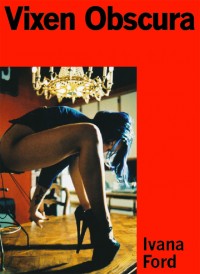 Ford features a range of women in her work—tatted women, redheads with ruby red lipstick, muscular women, pierced women, a pale woman captured in daylight with wild hair, women in bondage, feminine women, women of color, and one woman wearing briefs and a tie which I, um, particularly appreciated. Ultimately, Ford aspired to create a body of work with strong images that would intrigue and entice.