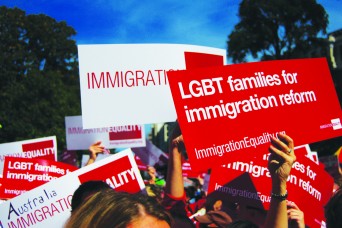 On Friday, Secretary of State John Kerry delivered remarks at the U.S. Embassy in London, where he announced thabht, effective immediately, the State Department will consider the visa applications of same-sex spouses in the same manner as opposite-sex spouses:

“One of our most important exports by far is America’s belief in the equality of all people. Now, our history shows that we haven’t always gotten it right. As I mentioned yesterday in Islamabad, slavery was written into our Constitution before it was written out. And we are still struggling to make equal the rights between men and women and to break the glass ceiling and to make sure that all people are created equal. That is what we try to do, I think wearing our heart on our sleeve, and sometimes our warts, more than almost any other nation on the face of the planet. We believe in working to do better and to live up to these higher values, and we try to do it in a lot of different ways.”