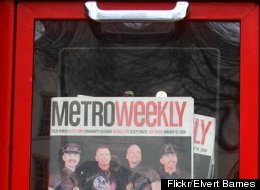 D.C. police continue to investigate several incidents of vandalism that have damaged LGBT newspaper boxes throughout the city.

Lynne Brown, publisher of the Washington Blade, noted that the newspaper began to receive these reports in February with some readers claiming they even witnessed the vandalism as it happened. She said that the unidentified vandal or vandals have also stolen newspaper copies from these boxes throughout Dupont and Logan Circles — this reporter observed empty Blade boxes last week on 17th Street, N.W., between P and Q Streets, N.W., and along Connecticut Avenue near Dupont Circle hours after that week’s issue was delivered to them.

“Thanks to all who have called, written and texted me their locations and witness to the event (s,) said Brown, who noted that the newspaper remains confident that the Metropolitan Police Department’s Gay, Lesbian Liaison Unit will apprehend those responsible for the vandalism. “A big thanks to Peggy and the Café Berlin folks on Capitol Hill and our tireless distribution company Media Point LLC. Those guys restock and repair as fast as humanly possible.”