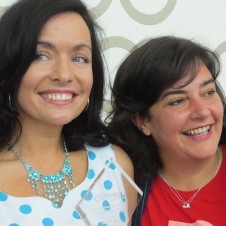 Anna Margarita Albelo is a triple threat in her latest film, “Who’s Afraid of Vagina Wolf,” which she wrote, directed and starred in. The film manages to be both a light-hearted romcom and a deeper look at the ways we hold ourselves back from reaching our full potential.

In this interview, Albelo opens up about her past influences, the representation of Latinas in queer entertainment and how hot her ex-girlfriends are (spoiler alert: very).

You were obviously very influenced by the film, “Who’s Afraid of Virginia Wolf?” Why did you connect so deeply with that film?

“Who’s Afraid of Virginia Woolf?” has always been one of my favorite films because of it’s raw honesty. It’s a story about concessions and people feeling they have failed: Two emotions everyone (at any age) can feel when evaluating their life. It’s main characters have created a fantasy that helps them get through life, just like a lot of artists and filmmakers do.

Both Guinevere and I are big Elizabeth Taylor and Richard Burton fans. Their on screen and off screen relationship adds more to the film’s story because everyone knew so much about them. In “Vagina Wolf,” the film within the film storyline gave me an opportunity to show the main character’s personal and professional life and how they impact each other to draw a richer picture of what she is going through.

Anna is so relatable, even when she’s dressed like a giant vagina. I have to ask, is she based on you?

I like to call it an “auto-fiction,” where I use elements from my life to create a character we rarely, if ever see: a Cuban-American, lesbian, filmmaker, freshly turned 40, committed to LGBT culture and feminism, then several other factors came in to play.

A couple of years before I wrote the story, I had inherited a vagina costume that I would walk around in for fun. It caused both positive and negative reactions so I called it the “Vagina Wolf.” It made me think about the fear we have of strong women, our own sexuality and vaginas in general. It all came together in 2010, when after 16 years of living in Paris, traveling the world and making my films, I found myself staying with my parents because I had no money. I had been completely dedicated to making lesbian films and documentaries, but it’s not the type of work that makes one rich. So, I decided that my first film would be both personal and political, yet very universal as a romantic comedy. It gave me an opportunity to talk about lesbian culture in a fun, bitter-sweet way and own it.

It was really awesome to see a lesbian-focused movie starring a Latina character. What do you think of the portrayal of Latinas in queer entertainment? How do you think “Who’s Afraid of Vagina Wolf” fits in?

I thank god for Mary Guzman (“Desi’s Looking for a New Girl”), Aurora Guerrero (“Mosquita y Mari”), Rose Troche (“Go Fish”), not only for the films they make, but for the leadership and activism they do. On top of being women and of color, which puts us in the low end of the entertainment pile, there’s the problem of being called “Latinas.”

Being of Cuban, Xicana or Puerto Rican decent makes a big difference. It’s a constant fight to get representation and the main reason I made my main character a Cuban-American. Unfortunately, a lot of the reviews of my film don’t spend anytime talking about the Latina aspect and spend more time on the lesbian aspect. I’m thrilled you asked the question.

Also, is that really your mom in the movie?

No, she’s a great actress called, Gloria Sandoval. I had to slightly change the script to acknowledge she is not Cuban (she’s El Salvadorian) because I knew Cubans would detect her accent and be upset if I tried to pass her off as Cuban. My mom was actually mad that I didn’t ask her to play the part even though we both know she’s a deer in headlights when I try to film her.

It’s really hard to get a lesbian film made. How did you go about making this movie into a reality?

It was a hybrid formula between collaborative filmmaking, crowd-funding, private investors and miracles.

The key ingredient was passion, but I also spent several years working on other films, meeting crew, mentors, producers, so I would know what I was doing. Crowd-funding had just come on the scene and I highly recommend it not only for the funds, but it also makes you communicate A LOT and raise awareness for your project. Part of the money came from that, then private investors, notably my executive producer Jane Costello who knew my previous work from attending Outfest, as well as, a French producer who had produced one of my earlier shorts. I hadn’t anticipated that editing the film would take so long (a year more), but I kept communicating on where I was in trying to finish the film so friends reached out and invested small amounts to keep me afloat. Then, finally, we won a grant in France to finish the film. It was a miracle.

The main point is that if you are passionate and force yourself to communicate honestly about where you’re at and what you need, you’ll be surprised by how many people come forward and want to genuinely help.

You had a really great cast; did you learn anything from them during filming?

I learned from everyone, cast and crew. A lot of us wear many hats in filmmaking. There were a lot who had written and directed shorts and features of their own. Guinevere Turner, who wrote “Go Fish” and “American Psycho,” gave great feedback on the script and on set. I learned tons about structure and character development from working with screenwriter, Michael Urban. Carrie Preston, who plays Chloe (“Good Wife” and “True Blood”) had already directed three films. She gave me some great tips, especially when we were in crazy time crunches.

If I had one gripe with the movie, it would be with the love interest piece. In Hollywood films, we’re so used to the main character (usually a man) ending up with a perfect, model-esque woman at least 10 years younger than him. Why did you choose to have all of Anna’s love interests be so much younger than her and so conventionally attractive?

Aside from the casting being inspired by some true life relationships I had lived, I also wanted to show how feeling like a shlub because of insecurities can affect our relationships. Anna is attracted to Katia, the hot, art school girl, but mainly because she understands her work and is passionate about making films. Despite their wonderful first night together, Anna allows Katia’s beauty to paralyze her and self-sabotages.

With the other character, Julia, she is beautiful and natural and honest, but despite that, Anna is turned-off by tiny details, her hair, her Crocs.

In both these relationships, yes, the women are beautiful, and yes, Anna is older, but they are attracted to her work, her art, her drive. It’s a sincere message that despite looks and age, people will be attracted to who you are and what you do.

I don’t want to give away any spoilers; but what message do you want your audience to take away from this film?

I wanted to illustrate that a lot of our problems are built up and kept up by ourselves. It goes back to creating a main character who is both the hero and the villain of her life. Sometimes, the solution to our problems is so simple: honesty. Honesty with ourselves and others.

Do you have another movie in the works?

Yes, I’m developing several, notably a rock opera set in Paris where Gertrude Stein comes back to life, becomes Gertrude Franken Stein and creates monsters to get us interested in culture, rather than entertainment. It’s kind of like “Moulin Rouge” meets “The Rocky Horror Picture Show!”