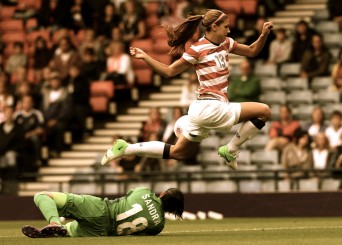 Just three days after the National Women’s Soccer League Championship later this summer, the U.S. Women’s National Team will reunite for a friendly match against Mexico. RFK Stadium in Washington, D.C. will play host to the September 3 contest.

Fans will be able to follow along on ussoccer.com’s MatchTracker and on Twitter at ussoccer_wnt. The meeting between the two regional rivals in the nation’s capital will mark the first international soccer match on the new FOX Sports 1, America’s new sports network, which is expected to be available in more than 90 million homes when it launches on Aug. 17.

“This event will only bring the players together for a few days, but as always, we relish the opportunity to play an international match,” said U.S. head coach Tom Sermanni. “Many of the U.S. and Mexican players will be coming right out of their club seasons, so everyone should be fit. We know we will probably face Mexico in World Cup qualifying so it’s good to see them before that tournament. It’s also a positive to get in a match before we give our players a bit of a break in advance of the rest of our fall activity.”

Tickets go on sale to the public Friday, July 26, at 10 a.m. ET through ussoccer.com, by phone at 1-800-745-3000 and at all Ticketmaster ticket centers throughout the Washington-Baltimore-Northern Virginia area (including many Walmart locations). Tickets will not be sold at RFK Stadium except on the day of the event.