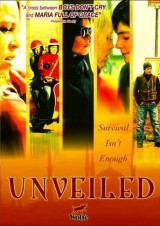 A lesbian drama in the vein of “Boys Don’t Cry,” Iranian lesbian (Jasmin Tabatabai) escapes to Germany where she passes as a man to gain refugee status and falls in love with a German woman.

Fariba, persecuted in Iran because of her love for another woman, assumes the identity of a man to gain temporary asylum in Germany. She takes an illegal factory job where fellow worker Anne takes an interest in the strange foreigner. As the two become close, Anne begins to suspect Fariba’s true identity and both women face danger when authorities tell Fariba she must return to Iran.

German with some Persian. English Subtitles.