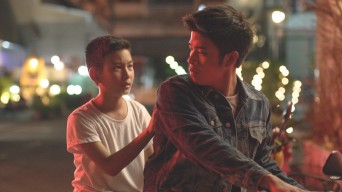 With an enigmatic title like How To Win At Checkers (Every Time) I wasn’t sure what to expect from this Thai film, written and directed by Korean-American Josh Kim. What I found was an understated yet finely crafted coming-of-age story where sexuality was not a plot device or a source of conflict, but simply a piece of admirably true-to-life characterisation.

This is all the more surprising given that How To Win At Checkers (Every Time) is Kim’s feature film debut. Having made short documentaries in the past, including an acclaimed film about trans women and the draft lottery in Thailand, he turned his attention to the bestselling short stories of Thai-American writer Rattawut Lapcharoensap.

“Even though the stories were set in another country,” says Kim, “I felt that the characters were people I knew, my brother, my neighbors, my friends. Rattawut wrote it in such a visual way that it felt like I had just watched a movie. It was almost as if I had licked the colors off a film strip.”

The film tells the story of little orphan Oat’s loss of innocence, as he watches his brother Ek deal with the fear and hopelessness of being entered into the military draft lottery at age eighteen. We see this unfold through Oat’s young eyes, unable to quite comprehend the magnitude of what is happening but in awe of his cool, motorcycle-riding brother and terrified to lose him.

Ek is gay and has a boyfriend, works at a gay bar and is close friends with a trans woman (a wonderfully nuanced portrayal) but none of this is treated as unusual by the characters in the film.

“It’s funny, in Thailand so many people have come up to me and said that the film is not an LGBT film, but rather that it’s a family film. I think people could feel this way because we decided not to make the LGBT aspect an issue. The conflicts in the film arise from other more serious problems in society and not from a character’s sexuality.”

What’s more, Thailand’s underground world of organised crime and prostitution is treated with a subtlety and respectfulness rarely seen in Western films that depict Thailand. This is not your usual one-dimensional sleaze-pit.

“I think one of the reasons the book stuck out to me was because the novels and stories I had read about Thailand (in English) previously dealt with crime and drugs and poisonous snakes.” says Kim, “It just felt like a really dangerous place to be and it was hard to relate to the usual detective protagonists. Rattawut’s stories were the first time Thailand felt like a place I could’ve grown up in. It was just a lot more relatable.”

The level of commitment that Kim brought to this project is exemplified in the fact that he actually learned the Thai language in order to communicate with his actors and be able to read the script in Thai. He enrolled in an intensive six month language program, four hours a day, five days a week. That level of serious dedication makes Kim a filmmaker to watch in the future.

Other than Kim himself, one of the film’s great strengths is its actors, all perfectly cast and capable of understated performances to match the film’s tone. Stand out performances by Thira Chutikul as Ek and trans actress Natarat Lakha as Kitty are particularly impressive, but it is Ingkarat Damrongsakkul as Oat who really surprises. Good child actors are a rare thing and Ingkarat is a delight as the innocent boy who just wants to be like his cool brother, holding his own in complex scenes with skilled adult actors. Kim says the casting process was gruelling,

“We saw an average of 20-40 people per day for 2 weeks straight. Ryu (young Ingkarat) was the first boy that came in and he nailed it. I was ready to move forward, but the producers reminded me that I had only seen just one boy. So we kept bringing him back in to match with the rest of the potential cast and I think by the 3rd time we all just knew that he was the one.”

It is interesting to note that both Rattawut and Kim share a certain insider/outsider status. From Asian-American families, having lived in both the U.S and Asia, they have a unique perspective. While a Thai film on this subject might be hard for a Western audience to relate to, and a Western film might be full of stereotypes, the cross-cultural point of view of both writer and filmmaker bring us the best of both worlds – a deep understanding of the culture and an ability to make it accessible to a wide audience.

“I guess you could say that there were benefits to our cross-cultural upbringings,” says Kim, “There are situations that can be at once familiar and unfamiliar. I think in Rattawut’s case, having a Thai heritage brought rich stories which he has seen, heard and lived. In my case, having roots from and living in Asia has also made me more invested in the way the story is told. I think the insider/outsider status helped both of us find the right balance between over-explaining cultural concepts and being able to express them to a more wider audience.“

How To Win At Checkers (Every Time) is a surprising, subtly political, finely crafted film that will appeal to anyone, regardless of race, location and sexuality – quite an achievement for a foreign-language indie movie from a first-time director.

You can watch How To Win At Checkers (Every Time) on Wolfe Video.