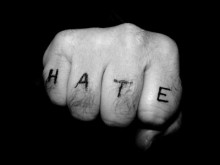 Wednesday’s shooting at the Family Research Council was a tragedy, and the wounded security guard and others who put themselves in harm’s way to overpower the shooter are indeed heroes. But how conservatives have responded in the shooting’s wake is incredibly disconcerting, an attempt to appropriate a tragedy to cover up the harm caused by their anti-gay views. As FRC readies its “Religious Liberty Under Fire” campaign, the National Organization for Marriage’s Brian Brown has offered the most flagrant response, claiming that the use of the term “hate group” is an invitation to violence.

BROWN: NOM has always condemned all violence and vilification connected to our ongoing national debate about the meaning and definition of marriage. For too long national gay rights groups have intentionally marginalized and ostracized pro-marriage groups and individuals by labeling them as ‘hateful’ and ‘bigoted’ — such harmful and dangerous labels deserve no place in our civil society and NOM renews its call today for gay rights groups and the Southern Poverty Law Center to withdraw such incendiary rhetoric from a debate that involves millions of good Americans.