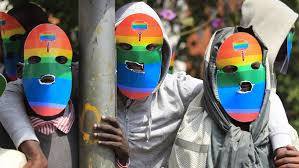 On Monday, February 24, Ugandan President Yoweri Museveni signed the country’s Anti-Homosexual Bill, also known as the “Jail All the Gays” bill, into law on live television.

The bill, which previously included the death penalty for those convicted of “aggravated” homosexuality, was passed in an attempt to toughen up on current anti-LGBT legislation. The new law includes jail time for first time offenders, those who “promote” homosexuality and those who fail to report homosexuals to the police; repeat offenders can be sentenced to life imprisonment.

According to South African Archbishop Desmond Tutu, Museveni had previously promised him he would not sign the bill into effect. “I was […] very disheartened to hear.”