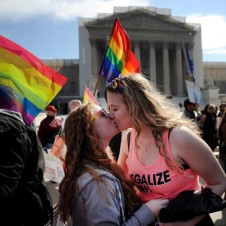 America’s youth are continuing to support equal rights for the LGBT population, with a new public opinion poll released by the Pew Research Center revealing that 70 percents of Americans born after 1980 support marriage equality. The “millennials,” are leading a change in overall public opinion, which has even seen those born between 1928 and 1945 nearly doubling their support for marriage quality, from 17 percent to 31 percent in the latest poll.

Millennials saw a massive increase in support, with only 51 percent in support of marriage equality in a 2003 poll. The youth are now some 27 percent of the American population, which the Pew Center says will be a major determining factor in the future of the LGBT rights movement.