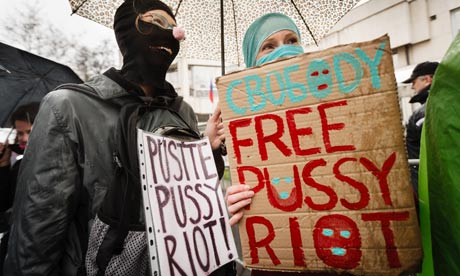 The Russian police have been hunting for other members of Pussy Riot, the feminist punk band three of whose members have been sentenced to two years in a prison colony after being convicted on charges of “hooliganism” motivated by religious hatred. The BBC reports that, according to the band’s Twitter account, two members of the feminist collective have fled Russia: “In regard to the pursuit, two of our members have successfully fled the country! They are recruiting foreign feminists to prepare new actions!”

Along with jailed Pussy Riot members Maria Alyokhina, Yekaterina Samutsevich and Nadezhda Tolokonnikova, the two women who have fled Russia were among those who participated in a “punk prayer” at Moscow’s Christ the Saviour Cathedral in February.