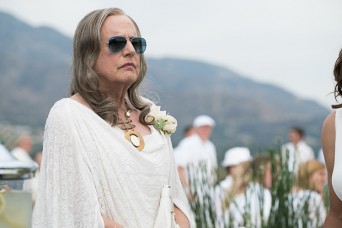 Amazon Prime’s groundbreaking original series Transparent is back for a new season and better than ever. When it was released last year I wrote about the relative lack of buzz surrounding this incredible show, so it was heartening to see it recognised with Golden Globes, Emmys and a GLAAD award and to see that, this time around, people were excited for the next instalment in the Pfeffermans’ beautifully dysfunctional story.

Beginning with a somewhat one-note wedding episode, the season soon deepens and picks up momentum. The first episode feels indulgent and shallow after the memory of the subtle depth of the previous season, its least endearing quality being the sheer unquestioned vulgarity of this lavish, expensive wedding that ultimately ends in the couple breaking up. But by the second episode things get interesting and a number of fascinating arcs are set in motion. Maura is back with her ex-wife Shelly, a step backwards that is clearly not a happy development for our heroine. As the season progresses, we see her moving through a new phase of her trans journey, having navigated coming out and being out. Now that she’s finally allowed to be herself, just what kind of woman does Maura want to be? Sarah, having belatedly jilted Tammy, finds life as a single mother a struggle and embarks on a journey of soul searching and sexual discovery that leads her to unexpected places. Josh and Raquel are settling down together, but Josh’s almost grown son Colton, who showed up unexpected last season, is here to stay and as he and Raquel try to handle the various stresses of their new complicated family, disaster strikes. And then of course there’s awesome Ali, back with an unapologetically non-gender-conforming look and exploring her queer identity, her Jewish identity and how the two overlap, once again stealing the season as the most fascinating Pfefferman.

The big complex theme of this season is intersectionality, and every character deals with how their own multiple identities overlap, contradict and interact. This subject is faced head-on when Sarah and Ali take their Moppa to the Womyn’s festival, which – unbeknownst to them – does not look favourable upon trans women. The campfire debate between radical feminists and Maura about the false dichotomy of privilege and oppression is one of the most tense, thought-provoking scenes in Transparent to date. Ali’s interest in the relationship between queer and Jewish identity, inspired (perhaps – it is never clear just how much Ali knows about her family’s past) by the Polish Pfefferman’s brushes with gender fluidity and open sexuality back in 1930s Berlin, brings up some quite boldly intellectual ideas. It is impressive to see a TV show willing to approach these complicated, thorny subjects with empathy, nuance and, yes, humor.

As always, the writing, direction and performances are impeccable here. Gaby Hoffmann reprises the boyish intensity of first season Ali, bringing a new sultry maturity that makes her positively Frida Kahlo-esque in certain scenes, while Amy Landecker both lightens and deepens her performance as control-freak-turned-train-wreck Sarah. With an impressive cast of queer guest stars including Carrie Brownstein, Trace Lysette, Cherry Jones,  Tig Notaro and impish porn performer Jiz Lee, this is a show that wears its queerness on its sleeve and that clearly cares about queer visibility. Anjelica Huston’s small part as a new love interest for Maura is, of course, transcendent and I cannot wait to see if she appears in season three.

Transparent‘s second season builds on the foundation of its first with a bold, complex look at intersectional identities and how these impact our lives, loves and families.